Mirta Galesic is keynote speaker at GOR 21. We had the opportunity to speak with her about the wisdom of crowds concept and how it improves forecasts in election polling. Further we discussed with her about the upcoming federal election in Germany, the science system and the way research is marketed here and the US. 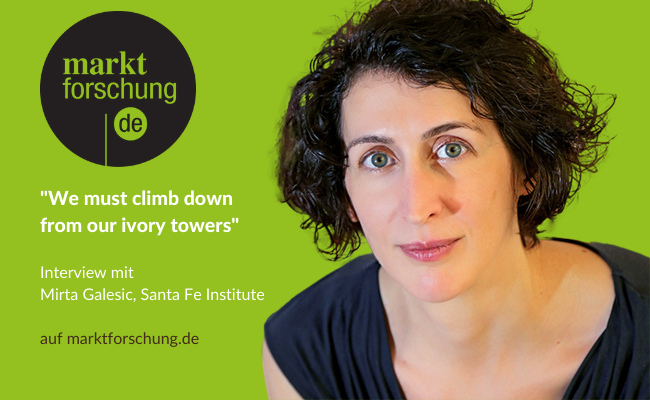 Ms Mirta Galesic, you are Professor of Human Social Dynamics. What is behind these three big words? What do you do on a small scale? What are your main areas of research?

Mirta Galesic: My colleagues and I develop theories and empirical tests of cognitive and social changes on individual and group levels in complex social systems. We ask questions such as: Why do individuals change some beliefs quickly in light of new information while they fiercely resist changing other beliefs? Why do some beliefs spread faster than others? Why do societies sometimes come to consensus about an issue and at other times splinter in clusters with widely different beliefs?

At this year's GOR you will give a keynote entitled "Election polling is not dead". Even if death of election polling is denied, the choice of words implies that election research has at least one serious health problem. Is that true?

Mirta Galesic: This provocative title uses words that were actually written in the media about election polling after the 2020 U.S. elections. In the 2020 U.S. presidential election, most polls overestimated Biden’s advantage in national vote share, on average predicting that his lead over Trump will be around 8 percentage points, when the actual result was 4.5 percentage points. Indeed, the bulk of the coverage of election polling after the 2020 election asked where polling went wrong and some even suggested that traditional polling might be dead. A recent review of the problems associated with 2020 presidential polls conducted by a task force commissioned by the American Association for Public Opinion Research failed to reach firm conclusions about what went wrong. This contributes to a widespread public distrust in polling.

The subtitle of the keynote is: "Forecasts can be improved using wisdom-of-crowds questions". Can you please explain the concept? How does the wisdom of crowds help improve election forecasts?

Mirta Galesic: Traditional polls ask participants who they plan to vote for. In the 2020 election, we asked respondents in a large national study to also estimate how their family and friends plan to vote. This social-circle question capitalized on people’s ability to “sense” their immediate social environments, an ability they need to successfully navigate their everyday social lives. Based on the social-circle question, we estimated Biden’s advantage to be 3.4 percentage points, which turned out to be quite close to the actual election result.

In fact, in the three most recent national U.S. elections - 2016, 2018, and 2020 - the social circle question was a better predictor of election results than the traditional question about respondents’ own voting intentions. It also more accurately predicted national elections in different European political systems: France 2017, Netherlands 2017, and Sweden 2018. When we combined the social circle question with data from another wisdom-of-crowds question, who respondents think will win the election, our results were even more accurate.

Why is the social circle question a more accurate predictor? We believe there are three main reasons. First, when we ask people about the voting intentions of their social contacts, we’re implicitly increasing the poll’s sample size, collecting data about groups who might be difficult to reach. We’re using the “local wisdom of crowds” based on social sensing of a large representative sample of individuals.

Second, some people might misreport their true voting intentions to pollsters or decline to participate in election polls because of embarrassment, fear of harassment, or willing obstruction of pollsters. People's reports about the voting intentions of their social contacts can provide indirect information about the hidden voters and in some cases also help reveal the survey respondent’s true preferences.

Third, people’s estimates of how their social circle plans to vote today can provide hints about how social influences will change their own voting intentions in the future. For example, in the 2016 presidential election, we found that people’s reports about their social circles predicted their own voting preferences weeks later. Experiences of social contacts can be reliable, early indicators of changing societal trends – trends the survey respondent is likely to adopt in the future.

You lived in Berlin for more than six years: Do you have a special view on the German polling research landscape? What is your outlook for the role the German pollsters could play in the upcoming federal election?

Mirta Galesic: German survey methodology community is excellent and has a long tradition of developing rigorous new survey methods and tools. Large German survey projects provide extremely useful data for policy makers and citizens, spanning many decades. Election polling is also very well developed. However, we unfortunately live in an era of increasing distrust in the government, established media, and scientists. Self-proclaimed experts with excellent social media skills are very successful in changing public opinion in a way that serves their individual interests. Therefore, pollsters are facing a difficult task of preserving public participation in the circumstances of an increasingly distrustful electorate.

Mirta Galesic: Haha, I have no idea. All I know is that I love GOR and was extremely honored to be invited to give a keynote. GOR 2002 has been the very first international conference in which I have ever participated. I got a prize for the best poster and for a young PhD student from Croatia at that time this was a huge boost in confidence. The community was very welcoming and kind. I met many of my research idols at that time and learned immensely from all the conversations and talks. This experience resulted in several productive collaborations and led me further on my path to become a better survey methodologist.

You are employed at the Santa Fe Institute in New Mexico, USA. "At the Santa Fe Institute, we search for the hidden order in the evolved universe", it is stated on the web. Research is rarely marketed so well in Germany. Which science system is more suitable for you? Where do you feel more at home academically?

Mirta Galesic: Santa Fe Institute indeed invests a lot in translating its research for a variety of audiences. But overall, we scientists are very much lagging behind the many other communicators that are winning people’s minds and hearts. We often neglect communicating our findings to broader audiences in a way that can be easily understood, sometimes mistakenly believing that they cannot understand anyway. Following best scientific practices, we devoid our facts from any context, making it difficult for people to connect our findings with their everyday experiences. We are slow to react and disprove to obvious disinformation spread daily in the public. However, gone are the times when we could safely live in our ivory towers and proclaim our findings to respectful audiences. Because of our inaction, and because of immensely skilled activities of sources that spread misinformation, people make decisions that are not in their best interest. We must climb down from our ivory towers, invest much more resources in communication, and explain to people our work and its benefits for them and the society. This is the case in all countries, and certainly both in the United States and in Germany.

GOR 21 will take place online for the second time in a row. This offers the great advantage that researchers from all over the world can participate. On the other side of the balance lies personal contact. What weighs more on your personal scale and those of science?

Mirta Galesic: Personal meetings are very important for establishing initial trust and liking that can then fuel joint projects for years to come. They are also immensely important for initial brainstorming about projects and for solving large obstacles along the way. When projects are more established, the projects can be executed virtually quite efficiently. When it comes to conferences, online formats enable much more inclusive participation and help to at least glance at many more talks than when they are held in person. However, I miss face to face conferences as they help one to step outside one’s usual box, physically and psychologically, and make connections one wouldn’t usually make.

What are you particularly looking forward to? Are there any tracks or specific events that you already have marked in your calendar?

Mirta Galesic: I will try to see as many presentations as possible – they all seem extremely interesting. I feel the same excitement as I did during my first GOR in 2002 :)

So you have been to a whole bunch of GORs: What is different to other conferences? What do you like about it?

Mirta Galesic: At least three things. First, GOR conferences have always been transdisciplinary, already at a time when the need for this was not so well recognized as today. At any GOR one can hear talks ranging from political science, psychology, sociology, survey methodology, computer science, and statistics, to name just a few disciplines. Second, GOR conferences have always been a place where one can hear about latest rigorously developed innovations. From web surveys to analyses of big data, GOR participants have always been at the forefront of new methodologies. Third, GOR community has always been very welcoming to newcomers, extremely smart, and playful, while scientifically excellent. One can always learn a lot of new things at GOR.

Thank you very much for the interview!

You are welcome and thank you!

About the interview partner: 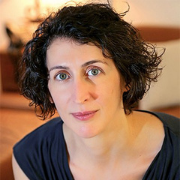 Mirta Galesic is Professor at the Santa Fe Institute, External Faculty at the Complexity Science Hub in Vienna, Austria, and at the Vermont Complex Systems Center, UVM, as well as an Associate Researcher at the Harding Center for Risk Literacy at the University of Potsdam, Germany.

She studies how simple cognitive mechanisms interact with properties of the external environment to produce seemingly complex social phenomena. In one line of research, she investigates how apparent cognitive biases in social judgments emerge as a product of the interplay of well-adapted minds and the statistical structure of social environments. In another, she studies how collective performance depend on the interaction of group decision strategies and network structures. A third line of research investigates opinion dynamics in real-world societies using cognitively-enriched models from statistical physics. And, she studies how people understand and cope with uncertainty and complexity inherent in many everyday decisions.